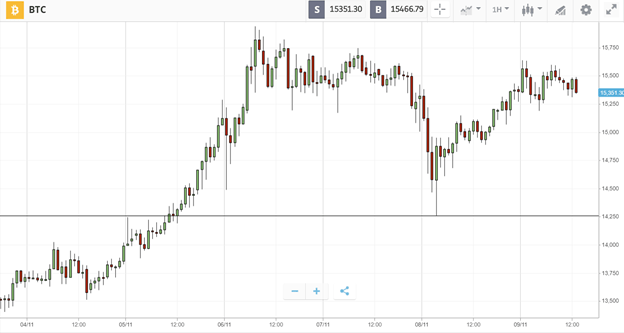 As results seesawed for days during the US election, Bitcoin emerged as a clear winner. The leading cryptocurrency hit highs above $15K, before pulling back slightly as media networks announced that Joe Biden will be entering the White House.

The crypto rally was accompanied by a weakening dollar, which fell on expectations that president-elect Biden will push through more coronavirus stimulus measures. This boosted the S&P 500 to deliver its best week since April with 7% gains, but Bitcoin stole the show with a 13% surge.

Elsewhere, the rally was supported by more bullish news. Demand has surged for PayPal’s crypto products, and central banks around the world — including in Canada, Thailand and Brazil — are pushing ahead with plans for digital currencies.

This week marked a monumental milestone for Ethereum, which moved one step closer towards the launch of Ethereum 2.0.

In a blog post on Wednesday, the Ethereum Foundation announced that Ethereum 2.0 will finally go live on December 1, and that the staking contract is now available. Since then, almost 50,000 ETH has been deposited by budding stakers looking to help support the network.

Ethereum staking is planned to be supported on eToro, alongside existing support for Cardano and Tron.

Bitcoin is eating away at institutional demand for gold, according to a report from JPMorgan.

Data from the investment bank shows that funds have been flowing out of gold ETFs as demand has grown for Grayscale’s Bitcoin Trust, suggesting family offices and asset managers increasingly see Bitcoin as a better alternative than the yellow metal.

In similar news, veteran investor Bill Miller told CNBC on Friday that Bitcoin’s staying power gets “better every day” and that “every major bank” will eventually have exposure to Bitcoin or a similar asset.

After making big gains for five consecutive weeks, Bitcoin is almost approaching the all-time high. Yet as the price pushes upwards, the crypto sentiment indicator is lurching into extreme greed, suggesting a pullback could be in store.

Nevertheless, with the pandemic still escalating, and the dollar weakening on loose monetary policy, traders are likely to continue seeking alternative stores of value like Bitcoin.

If the rally continues, then the next level of resistance lies at $16K. Beyond this, Bitcoin faces the final test at the 2017 high of just under $20K.